I've been working with some nice software called Meteohub to interface a Peet Bros Ultimeter 2100 to the Internet.  Meteohub was originally written to run on a Linksys NSLU2 NAS device, to provide a low power, low cost, very small form factor device. It's a great concept, and works great, when it works.

The problem I experienced was that stability and reliability was poor, at best.  It started out great, and the box ran flawlessly for a month or more, until the power went out. Then it wouldn't reboot.  After a couple of attempts it started up and ran fine.  For a week.  Then another week.  Then nothing.

I found that the USB flash drive had stopped working.  Apparently a common problem, as flash memory is of variable quality, especially the mass retailer variety USB thumb drives, that generally aren't designed for 24×7 operation with software continuously writing to them.

Meteohub has several other "approved" hardware options, but most were more money than I wanted to spend, and required ordering from companies I'd never dealt with, and didn't really seem to be setup to deal with selling in small quantities to customers.  So my search has begun to find a more reliable platform to run on 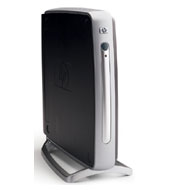 Which brings me to where I am now.  An HP Compaq device, originally intended to be a "Thin Client" device on a LAN.  No fans, no hard drives.  Reasonably small, much smaller than a PC, but larger than the NSLU2 devices.  Mine is about 9 inches tall, 8 inches deep, and 2.5 inches wide.  It has an external 24W power supply, so energy consumption is low (I have not yet measured it on my Kill-a-Watt).  It has a LAN port, 4 USB ports, an RS232 port, and even has keyboard and VGA ports, which will help when initially setting the device up.  These units are available in different configurations, memory size, CPU, etc.

Mine had a smallish IDE Flash memory drive in it.  I don't recall the size, but it was in the MegaByte range, and I need about 4GB of space for MeteoHub to be happiest.  My plan is to pull out the included Flash drive and install a Compact Flash memory card in it's place.  I found the needed adapter and cable on eBay for a few dollars.

I haven't yet powered the system up, but I hope to be able to do that soon and see how it works out.  With a little luck I'll have the Independence weather station reporting into the Weather Underground site again within a couple of days.

Edit to add:  This system worked out great, until the fire station was struck by lightning and killed the power supply and ethernet ports.  I've never replaced that system, but since I was given a Davis Vantage Pro station to install at the home QTH I built another Meteohub box from an older Mini-ITX motherboard, and an IDE to CF adapter.  Works great.