Some photos this time around.

To build a tower you have to dig a hole.  A pretty good sized one.  In my case a minimum of 30" square and 48 inches deep.  No problem.  In normal soil.

I don't live on "normal soil".  Our neighborhood is notorious for limestone.  Even the electric utility had issues bringing in power due to all the rock in the ground.  There's rumors that basements were dug with the help of dynamite.  I don't know about that, but what I do know is that I ran into my fair share of limestone.  It starts about 6" below the topsoil.  And it stops, well, I don't know where it stops.  I can't dig that far.  But I'm guessing it goes down a long ways since there is a quarry about 1/4 mile east of us.

Needless to say it took me awhile to dig that hole.  And in the end I rented a jack hammer to help me get through all that rock. Just a few of the rocks I dug out.

I ended up making it to 48".  I originally wanted to go 60" pretty badly, but after all that rock I'd had enough.  That and finding a place to get rid of all that rock.

The Rohn tower book says that the concrete base should be 6" above grade.  Or maybe it says 4" above grade.  I don't really remember.  Many hams leave the concrete several inches below grade, their thought process being that when they take the tower down they can just dump some soil there and plant grass.  Good in theory.  My concern was water, more specifically, rust.  I don't like rusty towers.  By keeping the base above grade I'm hoping to avoid any rust on the base of the tower. 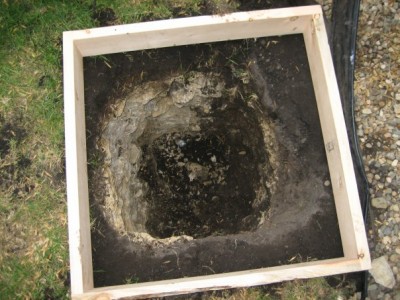 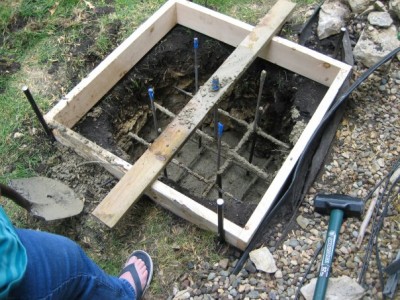 We added a welded rebar cage, and the J-bolts for the base plate.  And of course, the concrete. 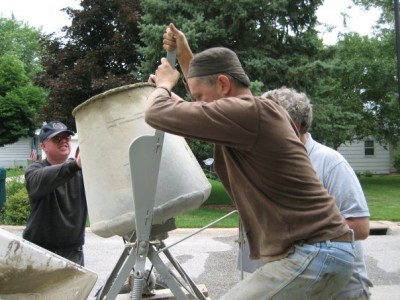 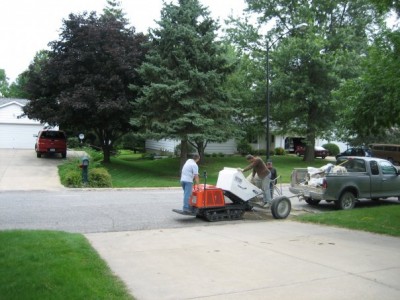 I had the easy job, driving the concrete buggy!  Best $75 ever spent.  Pushing wheelbarrows of concrete uphill would not have been fun. 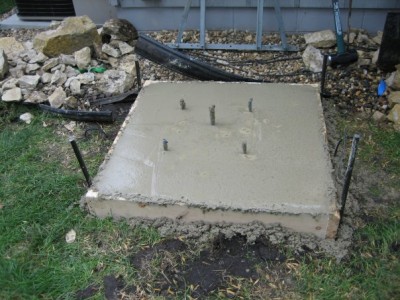 And here we are, 3500 pounds of concrete mix later.

I'm a bit slow at getting the pictures posted, it's been nearly two weeks since these were taken, so I'm a little bit further along than this.  More to come.

← Holy Cow, the site has been given an extreme makeover!
Tower Construction – Part 3 →